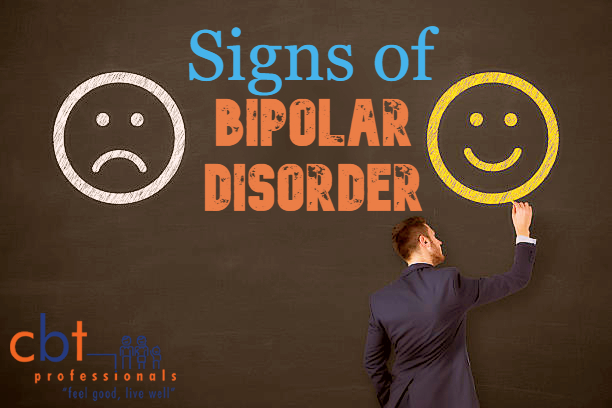 What is Bipolar Disorder ?

First of all, let’s bust the common myths usually associated with Bipolar Disorder. Have you ever heard anyone say “You have so many moods, you are Bipolar!” ?

Bipolar Disorder is not experiencing a variety of moods, or displaying entirely different personalities, nor is it experiencing hallucinations.

The actual word Bipolar is defined as having or relating to two poles or extremities – think north pole and south pole, night and day, left and right, you get my point!

Bipolar Disorder refers to intense swings between two specific moods – a ‘low’ mood (depression) and a ‘high’ mood (mania). But everyone experiences these ups and downs in their mood, right? Yes, however, Bipolar Disorder encompasses much more than low and high mood swings. Read on to learn the signs of Bipolar Disorder.

At first glance, Bipolar Disorder appears to primarily affect emotional state, however, a deeper look into Bipolar Disorder reveals an impact on judgement, concentration, behaviour, energy levels, appetite and sleep. All these can translate into severe disruption in occupational, social and personal functioning and wellbeing. Let’s take a closer look at signs of Mania and signs of Depression.

The experience of mania can be likened to pressing the accelerator in a motor vehicle – everything speeds up.
Someone in a manic state can experience:
– Inflated self-esteem or grandiosity
– Increased talkativeness
– Decreased need for sleep
– Easily distracted
– Flight of ideas, shifting from one topic to another
– An increase in goal-directed activity, e.g. at work or socially
– Excessive involvement in high-risk activities, e.g. spending money recklessly or sexual indiscretion, or driving a car with excessive speed.

There are two types of mania in the bipolar diagnosis. While both experience similar symptoms (as described above), the difference between the two lies in the severity and duration of the symptoms:

1. Mania
A severe episode of mania that lasts for 7 days or longer. Someone experiencing mania may also have suicidal thoughts and/or may attempt suicide. Mania interferes with daily functioning and the individual may require hospitalisation.

2. Hypomania
A less severe form of mania, where an elevated or irritable mood lasts for approximately 1 to 4 days. Hypomania may also interfere with daily functioning, however, causes less impairment than mania, and does not require hospitalisation.

The experience of depression can be likened to pressing the brakes in a motor vehicle – everything slows down or comes to a complete halt.
Someone in a depressed state can experience:
– Sad, low mood
– Markedly reduced interest or pleasure in all, or almost all activities
– Insomnia or hypersomnia
– Feelings of worthlessness or excessive or inappropriate guilt
– Decreased ability to think or concentrate
– Recurrent thoughts of death or suicide, or a suicide attempt

Mental health professionals classify Bipolar disorder under three subtypes:
1. Bipolar I – at least one manic episode lasting 7 days or requiring hospitalisation. The manic episode may or may not be accompanied by an episode of depression. Bipolar I severely impairs daily functioning.

If you suspect you may have signs of Bipolar Disorder, or are experiencing any symptoms of mania or depression, consult with your GP. There are several medical and psychological treatment options for Bipolar Disorder. If you wish to consult a CBT Professionals psychologist and get assistance with a Bipolar Disorder management plan, then please print off our referral form here and take it with you to your GP.