10 Warning Signs You May Have an Eating Disorder 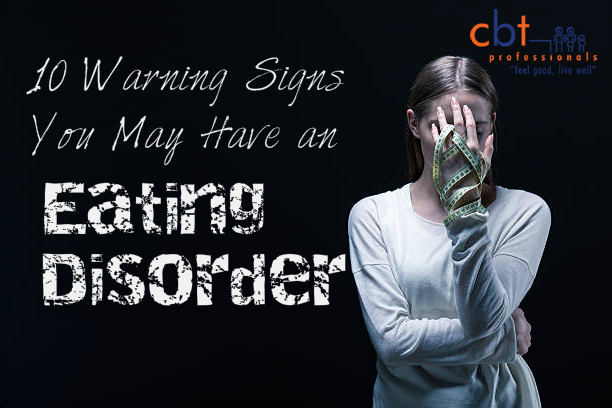 10 Warning Signs of an Eating Disorder

1. Low weight for height (BMI less than 17.5)
2. Preoccupation with food including constant dieting, counting calories, skipping meals, avoiding certain food groups such as carbohydrates or fats, replacing meals with fluids, obsessing over food preparation
3. Eating alone in order to hide your eating behaviours such as restricting or binging, lying to others about what you’ve eaten
4. Vomiting, using laxatives, or excessively exercising in an attempt to lose weight
5. Rigid and excessive exercise regimes, exercising when hurt or bad weather, and becoming distressed if exercise is interrupted
6. Preoccupation with weight-loss websites and social media groups, dieting tips in books, and images of thin people
7. Excessive time spent looking in mirrors and checking body for fat (e.g., pinch testing, measuring, daily weighing yourself)
8. Being extremely dissatisfied with your body image
9. Having an obsessive fear of gaining weight
10. Feeling like life is out of control or you are unable to control behaviours around food

If you can relate to the warning signs, then it is possible that you may have an Eating Disorder. Approximately6% of the Australian population will experience an eating disorder, the three most common being Anorexia Nervosa, Bulimia Nervosa, and Binge Eating Disorder. Following are the Diagnostic and Statistical Manual of Mental Health Disorders (DSM-V) criteria used by psychiatrists and psychologists to diagnose these Eating Disorders.

Anorexia is characterised by a distorted body image, with an unwarranted fear of being overweight. Symptoms include trying to maintain a below-normal body weight through starvation and/or too much exercise. Here are the DSM-V criteria:

B. Intense fear of gaining weight or of becoming fat, or persistent behaviour that
interferes with weight gain, even though at a significantly low weight.

Anorexia Nervosa can be specified as “restricting type” in which there is no binge or purging behaviour; or “binge-eating/purging type” where this behaviour is present. The severity is also specified by the person’s BMI with Mild (BMI>17), Moderate (BMI 16-16.99), Severe (BMI 15-15.99), or Extreme (BMI<15).

Bulimia Nervosa is characterised by eating large amounts of food followed by purging behaviour such as vomiting or the use of laxatives, as an effort to avoid weight gain. Following are the DSM-V criteria to diagnose Bulimia:

1. Eating in a discrete period of time (e.g. within any 2 hour period), an
amount of food that is definitely larger than what most individuals would
eat in a similar period of time under similar circumstances;
2. A sense of lack of control over eating during the episodes (e.g. a feeling
that one cannot stop eating or control what or how much one is eating.

B. Recurrent inappropriate compensatory behaviors to prevent weight gain, such as
self-induced vomiting; misuse of laxatives, diuretics, or other medications; fasting; or
excessive exercise.

C. The binge eating and inappropriate compensatory behaviors both occur, on
average, at least once a week for 3 months.

D. Self-evaluation is unduly influenced by body shape and weight.

1. Eating in a discrete period of time (e.g. within any 2 hour period), an
amount of food that is definitely larger than what most individuals would
eat in a similar period of time under similar circumstances;
2. A sense of lack of control over eating during the episodes (e.g. a feeling
that one cannot stop eating or control what or how much one is eating).

B. Binge eating episodes are associated with three or more of the following:

1. Eating much more rapidly than normal.
2. Eating until feeling uncomfortably full.
3. Eating large amounts of food when not feeling physically hungry.
4. Eating alone because of feeling embarrassed by how much one is eating.
5. Feeling disgusted with oneself, depressed, or very guilty afterwards.

D. The binge eating occurs, on average, at least once a week for 3 months.

` E. The binge eating is not associated with the recurrent use of inappropriate
compensatory behavior as in bulimia nervosa and does not occur exclusively during
the course of bulimia nervosa or anorexia nervosa.

Eating Disorders are the most lethal mental health issue – more people die from Anorexia than any other mental health diagnoses. There are also a mired of adverse physical side effects to having an Eating Disorder such as gastroparesis, constipation, stomach ruptures, malnutrition, pancreatitis, neurological symptoms such as numbness, tingling, dizziness and seizures, menorrhea, hypothermia, dehydration and kidney failure, lowered blood pressure, irregular heartbeat, and even heart failure (NEDA, 2019).To avoid these serious complications it is important to get help.

Treatment will often involve your doctor, a dietician, a psychologist and possibly a psychiatrist. Inpatient treatments are recommended where BMI are lower than 15. You can read more about the components of psychological treatment of Eating Disorders here.

If you or someone you know is experiencing any of these warning signs, please seek help by speaking to your GP whom can make referrals to establish your multi-disciplinary treatment team. If you wish to utilise our service for psychological treatment, you may wish to download our Referral Factsheet Here and take this to your GP.

Disclaimer: Content on this website is provided for education and information purposes only and is not intended to replace advise from your doctor or registered health professional. Readers are urged to consult their registered practitioner for diagnosis and treatment for their medical concerns.